“I thought they were from another planet!” he said in our interview. Growing up in the early 80’s, Chris was heavily into Black Sabbath, and dubbed himself a “metalhead”. Despite the generational gap, DiPinto recognized the potential of retro guitar designs—and he was one of the first. After seeing an article on Mosrite he became interested in surf rock guitars, and aspired to recreate the boldness and flare of designs from the 1960’s. DiPinto’s ingenuity brought these designs back into fashion, and made them applicable to new styles of music. Now, his guitars are appreciated by a breadth of musicians who play jazz fusion, indie rock, surf, and more.

The charm of a DiPinto Guitar is that it appeals to everyone. If you are part of a generation that grew up in the 60’s, it looks like your first guitar. If you are part of a younger generation, the elaborate and dazzling design is like nothing you’ve seen before. Behind this unique instrument is a tremendous amount of work and creativity, and the story of Chris DiPinto.

How did your interest in guitars evolve into a profession?   I started playing guitar in fifth grade, which is pretty early. I was teaching my friends how to play, and I was altering my own guitars as well as theirs. The thing was I played left-handed, and I couldn’t find a lot of left-handed guitars. I also got into 60’s surf guitars, and it was even more rare to find a lefty in that style. So I decided to make my own. My dad had a hardwood floor in his kitchen, and there were all these extra oak floorboards I used to help make my first guitar. I also used some materials from Home Depot and RadioShack, and a few parts from old, cheap guitars. People loved it when I played it live on stage, and I got requests to make more. That was all I ever wanted to do—to make guitars and own a guitar factory. So I designed three models: the Galaxie, the Mach IV, and the Belvedere. I still sell those same three models today.

How would you describe the aesthetic and look of your guitars?   We’re trying to make wild guitars that look like they’re from a pawn shop. When I grew up there were certain guitars that appealed to kids who were just learning how to play. They were cheap, funky Japanese guitars from the 60’s that weren’t available unless you went to a pawn shop. My idea was to take these neat, crazy guitars and make them playable, on stage and with any type of music. If you wanted a more “professional” guitar then you’d end up playing a Fender or a Gibson, which are more standard and conservative. The Japanese designers were wild and over the top, and I’ve tried to come close to what they were doing. Today, when everything looks like an IKEA couch, this type of guitar definitely stands out.

How did people first receive your unique style of guitars?   If you look around you’ll see a lot of retro guitars these days. Back in ’95 I was one of the only ones making them. I was at the NAMM Show, which is a huge trade show for musical instruments, and people would come to my booth and laugh…in front of me! Eventually everyone started to come around. Now almost every company has a sparkling guitar, or a guitar with a racing stripe on it. It was a good feeling to know that I was one of the first few people designing guitars like that at the time.

Who are some notable musicians that play your guitars?   One of the first bands I made instruments for was Los Straightjackets. They’re easily the best surf band today, and they tour all over the world. They used to play on Conan O’Brien’s show, and Conan

wanted one of my guitars too. I’ve made guitars for a lot of musicians—David Bowie, Jack White from the White Stripes, Rick Nielsen from Cheap Trick, Dick Dale, who was one of the first surf guitarists. I’ve also worked with a lot of local people, like Kurt Vile. He’s a young musician from Philly who’s getting really big right now. When Kurt was a teenager he used to come into my shop. It’s great to see someone young and talented like him taking off.

How has DiPinto Guitars become involved in the community?   We’ve helped organizations like Rock to the Future and School of Rock, and donate guitars to local schools. We work with the Philadelphia Brotherhood Rescue Mission next door, helping people suffering from addiction get back on their feet. They do a lot of music over there, so we donate to them and fix their instruments. We also offer lessons, partly as a service to the community. I’ve taught autistic kids, kids with different learning disabilities, Vietnam vets. A lot of these students have been deemed “unteachable”, but they’ve learned how to play with me. It’s all about patience.

How has Fishtown grown since your business moved here?   My company has moved several times, and we finally ended up here in Fishtown. We’ve watched this area get crazy with awesome restaurants and nightlife. All these great clubs have opened up around us: Johnny Brenda’s, The M Room, Kung Fu Necktie, The Fire. There’re so many artists and musicians around, and so many different things to do. There’s still room for a lot to happen here, and it’ll be fun when it all comes together. Fishtown is big, and it’s getting bigger. 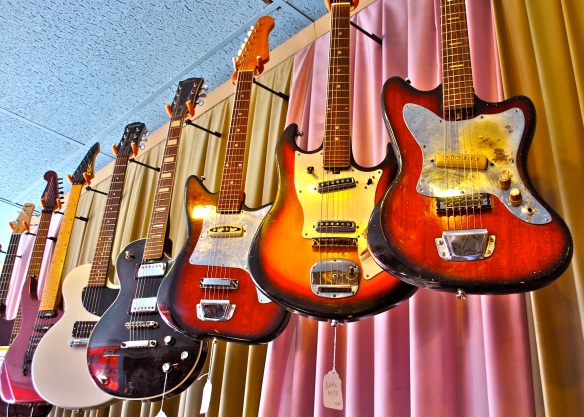