The first feature of Fishtown Spotlights will be Greensgrow Farms, located at 2501 East Cumberland Street. Greensgrow sells locally grown food and has a wealth of resources for gardening. It’s also known for engaging the community through various programs.

Greensgrow is more than a local food market. It offers cooking classes, helps aspiring businesses, and uses creative solutions for sustainable living. The staff is always working on a new project, and continues to spread the benefits of urban agriculture. With an expanding range of new ideas and services, Greensgrow just keeps growing.

Greensgrow also has some great produce at its farm stand. There is a big difference between food from a supermarket and food from a local source. You’ll taste this difference after making a salad with their fresh arugula, or biting into one of their ripe figs. One of the main people responsible for growing and harvesting these foods is Nathan Hasler-Brooks, the head farmer at Greensgrow, whom I had a chance to interview. 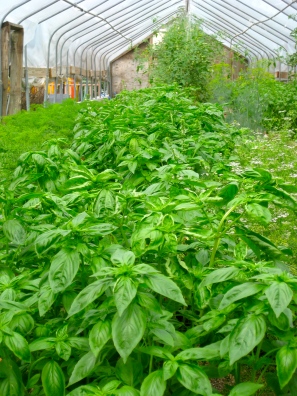 there was the first I ever tended. They were growing all these things I had never seen before. It was fun to watch everything grow and share the harvest with others. I did that for a couple years as I was doing social work. Then I found a farm that was looking to hire someone as an apprentice. I ended up working at Hillside Farm in Media, Pennsylvania. That was my first foray into farming. I had been a member of the Greensgrow CSA many years ago and knew about some of the cool stuff they did. I became interested in working in the city. It was neat to come back to what originally got me into farming, which was small urban agriculture, tucking vegetables in every corner, growing things anywhere you can. I was very excited to start at Greensgrow.

What do you enjoy about farming?                                                                           I like hard work. I never have a hard time sleeping. I lay down and fall asleep immediately. It feels really good to be outside and sweat, and know that you’ve worked hard. The part I love most is growing food. You plant the seed, water the seed, and hopefully the sun shines on it, but it seems like there’s some magic that’s got to happen for it to all come together, for you to get something that you can eat. I always get excited when I see my seeds coming up and they grow into big plants. Farming seems like a practical skill to learn, to be able to know how to grow food for yourself. I’m excited to be continually learning that skill. We have a farmer’s market right here on site, and that’s where we sell most of the stuff I grow. It’s so much fun to hand somebody a bag of salad greens you just grew 15 feet away, and know that they’re going to go home and share it with their family. Feeding people is the really fun part of farming.